14 Feb No love affair for the new U.S. President on Valentine’s Day as roughly two-thirds of SK residents are concerned about the Trump Administration

Women (26%), relative to men (16%) are more likely to state that President Trump’s policies will be “very negative” for Canada.

Another 62% of residents believe President Trump’s policies will be either somewhat (28%) or very (34%) negative for the U.S.

Regarding policies for the U.S., women (41%) are also more likely than men (27%) to believe President Trump’s policies will be “very negative” domestically.

Saskatchewan Residents Worry About Specific Details of the Trump Administration

When asked about concerns with a  variety of elements related to the Trump Administration, many Saskatchewan residents show a high level of concern.  Residents are most worried about increased political tensions in the world with 76% saying they are at least “somewhat worried”, followed by the ability of the Canadian Government to stand up for our interests at 74%. Worries are lowest for increased racism in Canada and travel difficulties to the U.S., although roughly one half are still at least somewhat worried. 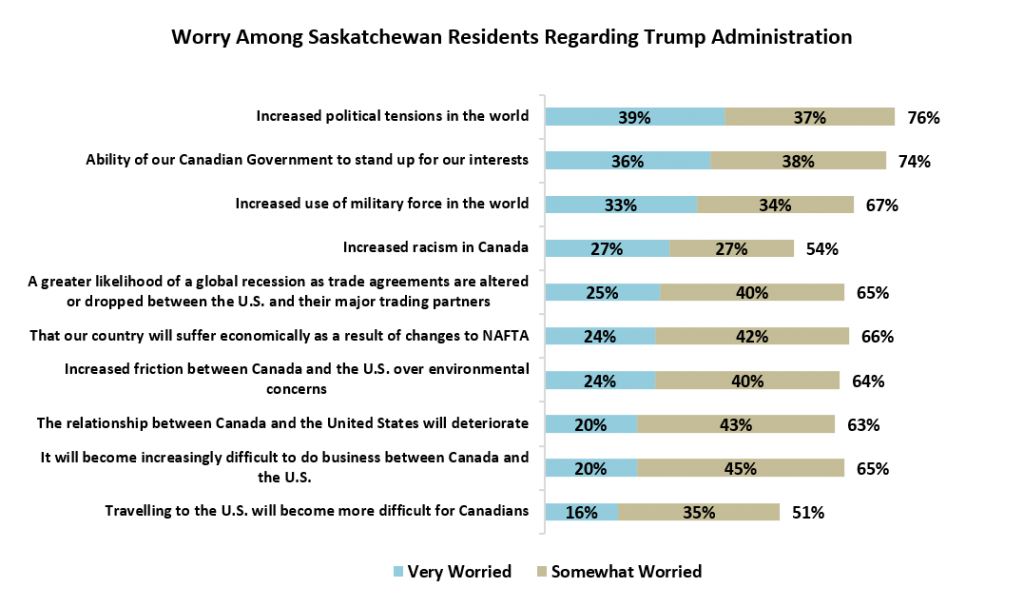 A total of 801 randomly selected SaskWatch Research® panel members participated in the online research study on February 7th through 9th, 2017. Quotas were set by age, gender, and region to match the general population of the province. Since the research is conducted online, it is considered to be a non-probability proportion sample and therefore, margins of error are not applicable.

Insightrix is a dynamic, Western Canadian, full-service marketing research company. It exists to serve businesses and government entities with insights-driven research solutions, and interpretive analysis through leading-edge tools and senior-level expertise across a broad range of industries. Insightrix is based in Saskatoon, Saskatchewan, Canada.