In a recent independent poll conducted by Insightrix Research Inc., 84% of Saskatchewan residents report they are aware that changes to impaired driving laws have taken place in Saskatchewan this year.

When specifically prompted with the following two impaired driving laws that took effect on January 1st, 2017, claimed awareness for each is high.

A large majority say they support the two new impaired driving laws, although more are in favour of the law related to zero tolerance.

Men are less likely to support the law related to 3 day vehicle seizures for BAC of 0.04% than women (70% strongly or somewhat support vs. 86%, respectively). Those of Indigenous ancestry are also more supportive of this law than those of non-Indigenous ancestry (89% vs. 77%). Support for the zero tolerance law is strong among both those between the ages of 18 and 21 (82%) and older residents (93%).

When asked if the new 3 day vehicle seizure for BAC of 0.04% law would impact one’s behaviour, more than four in ten say it would not. However, a sizeable proportion (35%) say the new law will have some or a lot of impact on their own personal behaviour. 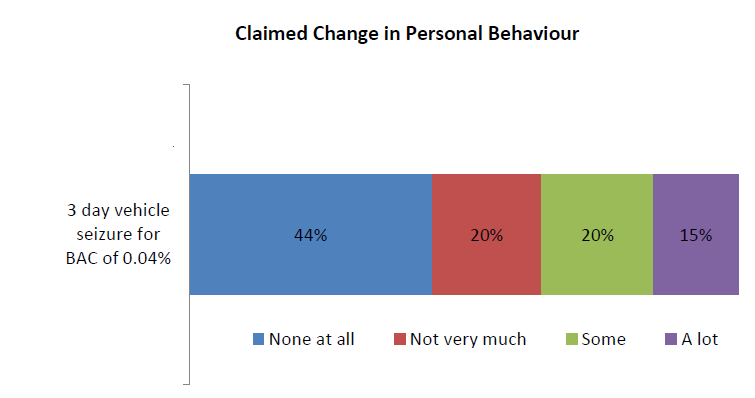 Claimed impact this new law will have on personal behaviour (some or a lot) is highest among younger residents and declines with age (42% among 18 to 34 year olds vs. 31% among those aged 55 years or older).

Research Details
A total of 801 randomly selected SaskWatch Research® panel members participated in the online research study on January 10th through 12th, 2017. Quotas were set by age, gender, and region to match the general population of the province. Since the research is conducted online, it is considered to be a non-probability proportion sample and therefore, margins of error are not applicable.

About SaskWatch Research®
Insightrix began developing its SaskWatch Research® online market research panel in October 2007, using high quality techniques including telephone recruitment and referrals from existing panel members. Presently, there are over 15,000 active panel members representing all regions of the province and distributions of the general population. The panel membership closely matches the 2011 Census based on age, gender, household composition, household income, and education. For more information, please visit http://saskwatch.ca.

About Insightrix
Insightrix is a dynamic, Western Canadian, full-service marketing research company. It exists to serve businesses and government entities with insights-driven research solutions, and interpretive analysis through leading-edge tools and senior-level expertise across a broad range of industries. Insightrix is based in Saskatoon, Saskatchewan, Canada.