In terms of the emerging technology itself, recognition tools are able to track your identity and keep note of things you regularly consume at a near-constant basis, and these tools have been revered as the next big market trend. The fact is, the demand is high for various industries in the race of the global recognition technology market.

Government and utilities, military and homeland security, retail, banking, financial services, insurance, digital signage and web and mobile applications all have a stake in the future of recognition technology. They all want to know what you purchase, where you purchase and (the stiffest to measure) why you purchase? 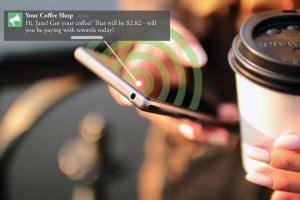 Take retail into consideration. The wholesale industry is expected to experience significant growth in the use of recognition technology. Retail companies are interested in per market strategies in order to analyze customers based on target quotas, such as age, gender and other categorical attributes.

Retail juggernauts are interested in campaigning to the consumers’ wants and needs, solely to hook you as a loyalist. For example, imagine waltzing into your favourite café and having your coffee already on its way to being made based on your ID via recognition technology.

Imagine responding to the real-time notification to pay for your coffee. Sounds pretty forward thinking, right?

Many retailers are already experimenting with recognition technology, such as with geolocation tools like iBeacons – a Bluetooth feature that can detect and record the location of smartphones. Like the purchase of a quick coffee, these beacons are often used to employ special offers to tempt consumers into purchase whether a consumer enters the store, or even when outside window shopping and passing by.

Geolocation technology has a large market stronghold – with mobile media giants like Facebook, Yelp, and Foursquare all adopting this special technology. Industry analysts have been skeptical for years about consumers broadcasting their locations and were fairly uncertain if this technology could even be monetized.

Despite this criticism, geolocation has since created a digital bridge between communication, the Internet and the target quota where on-the-go consumers will likely benefit for years to come.

With target quotas come innovative methodologies such as Sentiment Analysis. And with the adoption of recognition technology, associations and organizations, both public and private, can expand on anecdotal evidence such as the type of gender and age of recognition.

Sentiment analysis can lead to major breakthroughs when analyzing a consumer’s wants when it comes to special retail features. It is commonly used in targeted advertising in order to understand the voice of the customer, and where the company can then analyze consumer interactions and decide if they are being done well.

Of course, with the rise in technology growth, there is sure to be a rise in security concerns as these retail giants are rapidly adopting big brother-like technology (such as CCTV recordings), which are analyzed by facial recognition techniques and used for alarm systems, source-tagging and even aggressive advertisement.

Today, recognition technology is widely used as an effective advertising campaign tool. By measuring how an advertisement spot sells has been (for years) the No. 1 question on the minds of advertisers, brand developers and marketers alike. Understanding how to sell based on buyer emotions by way of advertisement can prove useful when attempting to quantify emotional expression regarding new products and services, and even promotional events such as media trailers and advertising campaigns.

Ever see the film “Minority Report”? This science fiction, neo-noir, Spielberg/Cruise flick (set in the year 2054) features a futuristic city dogged with optical recognition systems (retinal scan), exploited by a militarized government emergency service and used to scan distinctive features in the iris.

In “Minority Report”, this technology is further used in the place of security badges and identification, as well as for tailored billboards and ads. Wherever Captain Anderton (good ole, handsome Mr. Cruise) goes, he is tracked by cameras and biometric sensors and, as a result, is consistently bombarded with invasive, personalized ads.

In 2002, it seemed out of this world to experience the thought of mind-reading advertisements. But, what was once considered futuristic technology is now on the brink of reality. Though retina recognition devices are still considered in beta, with the progress and high interest in facial recognition, it can’t be that far behind, can it?

Do you ever feel like the world of Advertising doesn’t speak to you?

Well, much like in the film “Minority Report”, a German beer making company, Astra , is looking to cash in recognition technology as a vehicle for targeted advertising. In 2015, Astra introduced a new beer advertising campaign focusing on a Bavarian brand geared toward women.

By using a digital billboard, a built-in web camera and the latest in facial recognition technology, Astra was able to detect if a passerby was male or female, and based on the demographic the digital billboard, would either try and sell you a beer (female) or tell you to take a hike (male) – a bold move by a company that generally sells a product focused on men.

The real kicker is the public billboard was able to tell if advertisement onlookers were not legal age, and advised the minors that walked by to just keep on moving. Innovative use of recognition technology or obtrusive product selling?

Sometimes this type of targeted advertisement can be used for social awareness campaigns, too. For example, to coincide with the 2014 International Women’s Day, a London, UK-based agency teamed up with Women’s Aid and Ocean Outdoor to create some noteworthy digital billboards that brought awareness to domestic violence.

With the use of facial recognition, when an onlooker paid attention to the billboard of a battered woman, the billboard would remove the injuries. As more onlookers gazed directly, the cuts and bruises on the victim’s face would completely disappear – communicating that with each bystander we can make a difference in eliminating domestic abuse.

The human face has approximately 43 facial muscles that can produce roughly 8,000 different combinations of smiles, smirks and upside down frowns. Expressions are not voluntary, nor are they dependent on social origin or ethnicity. That is the neat thing – facial expressions happen automatically, and at a flash speed (no more than 10 to 20 milliseconds).

To be able to tap into a technology that can capitalize from recognizing standardized expressions will arguably change the way that advertisement designs are conceived and tested, making them more likely to succeed in the long run.

Not only will advertisement benefit from biometric technology, but as the recognition tech industry rapidly evolves as a whole, high-tech enhancements will help lead us toward a future of adapting a level of behavioural recognition across all major industries — including market research.

Behavioural research (or biometric recognition) often refers to an automatic recognition of individuals based on a particular feature from their physiological or behavioural characteristics. By using biometrics, a person can be identified based on who they are (e.g., face, finger scan, retinal scan, etc.) rather than what they are (card, token, number), or what they know (password, PIN).

Traditionally, passwords and key cards have been used to restrict access to secure systems, but these methods can and have been breached before.

The technology has become industrially unreliable and, therefore, biometric technology can make identity virtually impossible to steal, forget or forge – creating a lust for behavioural recognition technology among those organizations with the need for high-security clearance.

Emotional (and behavioural) recognition is a new frontier recognition technology. This method is accomplished by identifying patterns of certain behavioural triggers as they correlate to facial expressions – which are considered universal. By doing so, researchers are able to collect psychographic data at an unprecedented rate and at a much lower cost than what we’ve ever been able to do before.

This is the opportunity marketers have been waiting for –  the capacity to acquire a much deeper understanding of their customers’ needs without the barrier of being obtrusive.

Not only can the market research industry benefit from the use of biometric technology as research, MRX can also benefit from its use as a security measure to house its sensitive databases.

The Push to Quantify Emotions

With these emerging technologies come promise to clients that market researchers are now able to quantify emotions. Better tools for tracking emotions hold better promise for bringing awareness to how we feel through via outer feedback.

This type of technology also promises to make it easier to understand websites, mobile applications, advertisements and a consumer’s emotional state or response to the product or service.

This kind of technology can decipher the speaker’s mood, an attitude toward the subject and emotional personalities (drivers for decision making) – an example of the innovative methods that market researchers can utilize in order to provide a deeper meaning when attempting to achieve emotional feedback.

Techniques like speech emotional analytics can be employed to sort voice messages according to the emotions portrayed by the caller in call centre applications. Among other things, a dialogue system may deploy knowledge on emotional user states to select a strategy in speaking with the potential respondent.

This type of technology may even change the way we survey customers on their satisfaction levels – imagine being able to deploy a customer satisfaction survey with the use of emotional analytics.