Opinions closely correlate with support for provincial political parties. Specifically, those who say they would vote for the provincial NDP if an election were held today are more likely to believe that all liquor stores should remain public (52% vs. 15% among SaskParty voters who feel the same way) while those who would vote for the SaskParty are more likely to support privatizing all liquor stores in the province (37% vs. 8% among NDP voters who feel the same way). Roughly equal proportions of SaskParty and NDP voters (34% and 31%, respectively) support the current approach of keeping existing stores public and privatizing new stores. 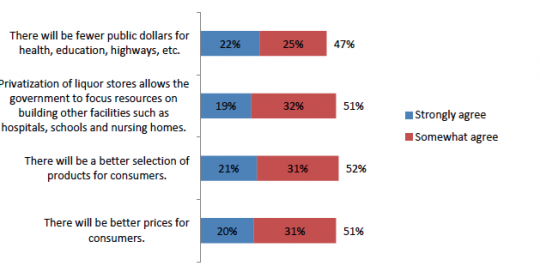 Research Details
A total of 800 randomly selected SaskWatch Research™ panel members participated in the online research study from June 3rd to 6th, 2014. Quotas were set by age, gender, and region to match the general population of the province. Since the research is conducted online, it is considered to be a non-probability proportion sample and therefore, margins of error are not applicable.

About SaskWatch Research™
Insightrix began developing its SaskWatch Research™ online market research panel in October 2007, using high-quality techniques including telephone recruitment and referrals from existing panel members. Presently, there are over 15,000 active panel members representing all regions of the province and distributions of the general population. The panel membership closely matches the 2011 Census based on age, gender, household composition, household income, and education. For more information, please visit http://saskwatch.ca.