In the conversation, co-hosted by Insightrix Research Manager, Partha Roy, many interesting and valuable ideas and concepts as they relate to ad testing were discussed. So many, in fact, that we chose to develop a short article around them. 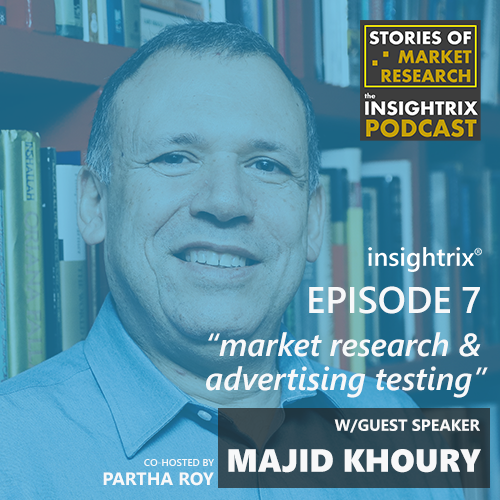 One of the first learnings from the podcast is that advertising research minimizes risk to clients.

Think of it this way: You’re asked to have a set of multi-channel ads developed for a campaign your company has been running. You contact an agency and provide a list of your company’s needs and a budget for the project. You wait, and after the creative is developed, you send your new advertisements out into the world on their various channels – only to find that nobody is connecting to the ads in the way you wish they would.

Or worse yet, the advertisements are poorly received by the public, placing a negative light on your brand.

In this hypothetical situation, you’ve spent your company’s money, but ultimately, you have very little to show for the time, effort and resources that were put into the ads’ development.

Wouldn’t it be better to spend a small fraction of that budget first to get some intelligence about whether those ads would be well received rather than hoping for the best?

This is why it’s always recommended to test ad strategy (what the story is) and creative (how the story is told) early in the ad development process.

Leaving what is usually a very small line item open in your budget to add a testing component to your advertising plans could end up saving the client a great deal of time and effort in the long run, all while making sure the best ads make it out into the world to be seen by the public.

The Best Advertising Research Outcomes Come Out of Collaboration

This is a myth! Do not buy it.

In fact, according to Majid (and from our own experience at Insightrix), the best outcomes for all parties – researchers, advertising agencies and clients – are often found when all three parties come together to work as a team.

This is about each group understanding the challenges of one another. For the client, challenges are going to be budget and time. For agencies, those challenges are going to be developing an effective and technically achievable creative in the time they have and on the budget they’ve been given. For researchers, those challenges could include developing a research plan and executing it on time and on budget – that includes research outcomes that are insightful and actionable for both the ad agency and the client.

If all parties are working together rather than as opposing entities, mutual understanding of what each group needs and wants out of each of their roles can be negotiated and realized – to the benefit of everyone involved.

Majid describes this best when he said, “I call it the triangle. It’s the best way to look at this is to have the agency, the client and the research – the advertising research – to work together as a team.”

Ad Testing Must Evolve to Be Faster

In today’s advertising marketplace, with multi-platform advertising campaigns in mind, clients need their advertising research turned around quickly, but without a loss in the quality of the research.

Majid refers to this reality as a need to change and evolve with the times. Building on the theme of working together with the client and the agency to develop the research itself, advertising researchers can work with both parties to get an understanding of their reporting needs and adjust reporting based on their needs.

Rather than taking unnecessary time to develop lengthy reports that do not serve clients’ immediate needs, often it is more important to  get the client the data they need quickly and in a format they can understand and operationalize immediately.

“I think it’s more about our thinking from a research point of view and as researchers about how to tackle this in a way that makes it faster and cheaper without jeopardizing the quality.”

Get the Rest of the Story

It really can’t be overstated how important advertising testing can be. Clients, agencies and researchers all benefit – and so does the final advertising product.

Would you like to learn about Insightrix advertising testing?

Fill out the form below to learn how ad testing can be done quickly, effectively and cost-efficiently using the Insightrix AdCheck advertising testing solution.