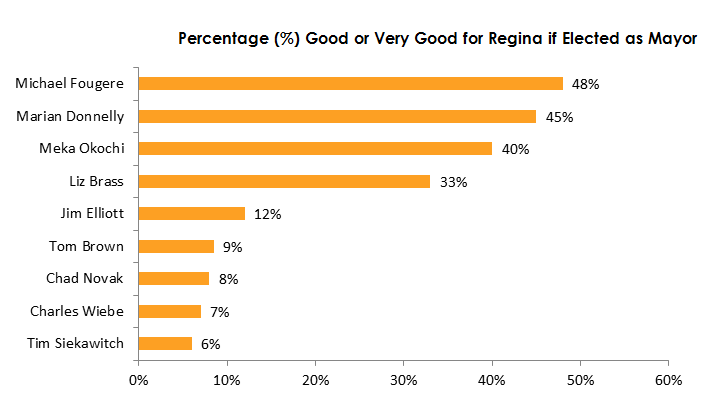 A new independent online poll conducted by Insightrix Research suggests that Michael Fougere has a commanding lead over his eight competitors vying for mayor, heading into the polls next week. Presently, of those who plan to vote in the upcoming civic election on October 24th, 2012, 30% intend to cast their ballot for Mr. Fougere. His nearest competitor is Marian Donnelly with 17% of Regina residents planning to vote for her, followed by Meka Okochi at 15%. The remaining six candidates each have less than 5% of voters planning to endorse them. However, one quarter of voters (25%) are undecided as to who they will cast their ballot in favour of on Election Day, which depending on their behaviour, could have a notable impact on the election outcome.

Further clouding the prediction of who may walk away with the title of mayor is the fact that 80% of respondents polled state they plan to vote in the upcoming election. This contrasts sharply with actual voter turnout in the most recent civic election (25%), suggesting that many who say they will vote on Wednesday may in fact not make it to the polls.

Regardless of voter intentions, when asked if it would be a good thing or a bad thing for Regina if each of the mayoralty candidates were elected to office, roughly equal proportions hold positive perceptions of both front-running candidates: 48% for Mr. Fougere and 45% for Ms. Donnelly. Meka Okochi (40%) and Dr. Liz Brass (33%) trail behind somewhat, while the remaining five candidates hold smaller positive impressions among voters.