With the one-year anniversary of the Honourable Charlie Clark’s election as the Mayor of Saskatoon, and the one-year anniversary of the re-election of the Honourable Michael Fougere as the Mayor of Regina having both occurred recently, Insightrix® asked residents to weigh in on how both mayors have performed through the past year.

Here is what they told us.

Perceived Levels of Approval for Both Mayors

Assessments of Mr. Fougere’s performance in his first year returning as mayor of Regina are somewhat less favourable. One third (33%) feel he has done a good job while a similar proportion (32%) say he’s done a fair job, and just under two in ten (17%) believe he has done a poor job as mayor since the most recent election. Eighteen percent (18%) of respondents stated they were unsure.

Perceived Actions that Received Approval for Both Mayors

When we asked residents of Regina what they thought Mr. Fougere had done well over his first year back as Mayor of Regina since his re-election, the top response was that he is professional/good leader (11%), followed by dealt with a difficult budget (9%) and improved/maintained roads (8%). Other responses are noted below.

*Note that respondents could have provided more than one response which is why the following numbers add to more than 100%. 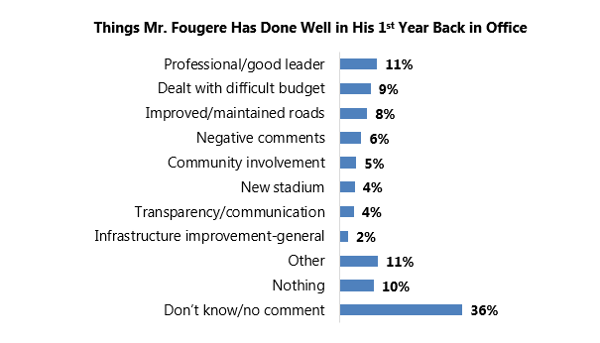 Similarly, when we asked residents of Saskatoon what they believe Mr. Clark had done well since his election approximately one year ago, the most common response was attended the Pride Parade/community involvement (17%) followed by being seen as professional/good leader (13%), transparency/communication (9%) and did not raise taxes/tried to save money (9%). Other responses are noted below.

*Note that respondents could have provided more than one response which is why the following numbers add to more than 100%.

A total of 810 randomly selected SaskWatch Research® panel members participated in the online research study on December 5 through December 7, 2017. Quotas were set by age, gender and region to match the general population. Since the research is conducted online, it is considered to be a non-probability proportion sample; therefore, margins of error are not applicable.

Insightrix is a dynamic, Western Canadian, full-service market research company. It exists to serve businesses and government entities with insights-driven research solutions, and interpretive analysis through leading-edge tools and senior-level expertise across a broad range of industries. Insightrix is based in Saskatoon, Saskatchewan, Canada.