Two thirds of Saskatchewan residents support the provincial government taking legal action against the federal government in regard to the Carbon Tax.

In a new independent poll conducted by Insightrix Research, Inc., residents were asked whether they support or oppose the Saskatchewan government in taking legal action against the federal government in regard to the federal Greenhouse Gas Pollution Pricing Act (i.e., the carbon tax). Results from this independent survey indicate that one half (51%) of residents strongly support this stance and another 16% somewhat support it. 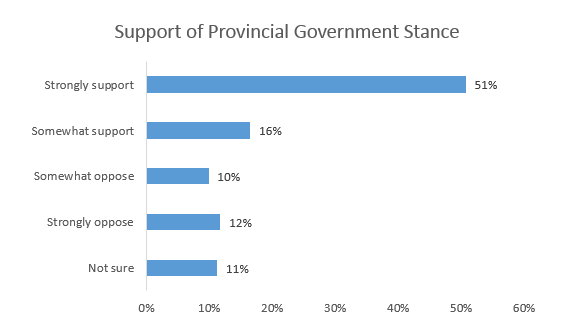 Most of those who support the legal action most commonly believe the Act will result in price increases, have minimal benefit to reducing pollution, be harmful to the provincial economy and simply be one more tax.  One half say they do not support the Act because they believe the federal government does not have the right or jurisdiction to impose such a tax.  Findings are uniform across demographic variables.

A total of 801 randomly selected SaskWatch Research® panel members participated in the online research study between March 5 and 7, 2019. Quotas were set by age, gender and region to match the general population of the province and as such the data did not need to be weighted.