A new independent Insightrix Research Inc. online poll finds that more than one half of Saskatchewan residents believe the economy is the biggest issue that should be discussed during the upcoming provincial election campaign.

Presently, 54% of Saskatchewan residents believe the economy should top the agenda during the upcoming election campaign. Specific topics within the category of the economy include: the economy in general (25%), employment and job creation (16%), the oil & gas downturn specifically (9%), provincial debt or budget deficits (7%) and taxes (4%).

Social issues are next on the list at 34%, including issues related to health care (18%), education (7%), poverty and affordable housing (7%), and refugees and immigration issues (5%). A total of 14% believe the SaskParty’s performance or stance on specific issues should be the focal point of the election, including items such as corruption and wasteful spending (6%), privatization (4%), the LEAN program (2%), GTH issues (1%), P3s (1%), or other Party issues or policies (4%). Infrastructure is noted by 6% of Saskatchewan residents while the environment is noted among 3%. 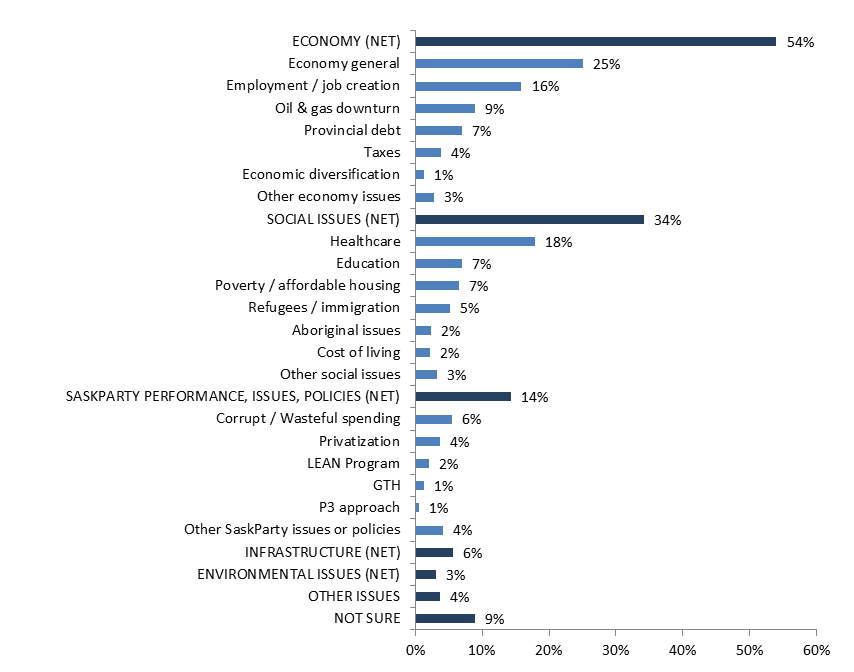 * Note that the above question was asked as an open-ended question and allowed respondents to provide text responses rather than pick from a list presented to them. Text responses have been coded into the above categories. Because some respondents listed more than one issue, percentages within the graph add up to more than 100%. Further, specific categories have been grouped into common themes which are denoted in the darker colour of the graph with the word (NET) next to the theme title. The percentages of individual codes may add up to more than the NET as multiple responses may have been given within the theme.

The survey also asked respondents who they feel would be a better Premier of Saskatchewan: Brad Wall or Cam Broten, with the incumbent presently holding a commanding lead. Those more likely to say Brad Wall include men and those living outside of Regina and Saskatoon.

A total of 800 randomly selected SaskWatch Research™ panel members participated in the online research study from February 9th to 11th, 2016. Quotas were set by age, gender, and region to match the general population of the province. Since the research is conducted online, it is considered to be a non-probability proportion sample and therefore, margins of error are not applicable.

Insightrix began developing its SaskWatch Research™ online market research panel in October 2007, using high-quality techniques including telephone recruitment and referrals from existing panel members. Presently, there are over 15,000 active panel members representing all regions of the province and distributions of the general population. The panel membership closely matches the 2011 Census based on age, gender, household composition, household income, and education. For more information, please visit http://register.saskwatch.ca

Founded in 2001, Insightrix Research Inc. is a full-service market research firm that helps clients develop, administer, and manage data collection and information strategies. From its office in Saskatoon, Insightrix offers a comprehensive range of research services.