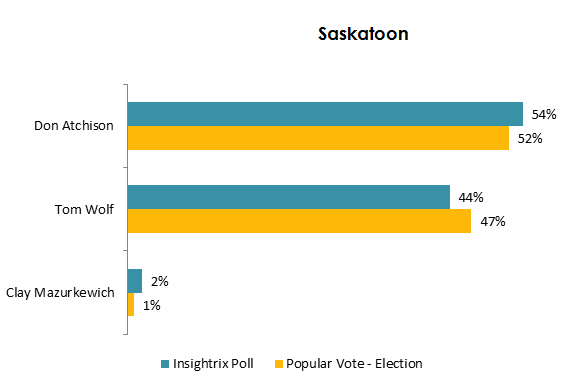 A new independent online poll conducted by Insightrix Research suggests that 38% of those who plan to vote in the upcoming civic election on October 24th, 2012 say they will cast their ballot in favour of Don Atchison while 32% plan to vote for Tom Wolf. Only 1% report intentions of voting for Clay Mazurkewich, 2% intend to spoil their ballot and an additional 6% said they would prefer not to say who they plan to vote for. However, a notable proportion of voters (21%) are still as to who they will cast their ballot in favour of on Election Day, which depending on their behaviour, could have a notable impact on the election outcome. Excluding those who are undecided or prefer not to say, 54% plan to vote for the current mayor, 44% for Mr. Wolf and 2% for Mr. Mazurkewich. Further clouding the prediction of who may walk away with the title of mayor is the fact that 76% of respondents polled state they plan to vote in the upcoming election. This contrasts sharply with actual voter turnout in the most recent civic election (27%), suggesting that many who say they will vote on Wednesday may in fact not make it to the polls. Regardless of voter intentions, when asked if it would be a good thing or a bad thing for Saskatoon if each of the mayoralty candidates were elected to office, roughly equal proportions hold positive perceptions of the two front-running candidates: 54% for Mr. Atchison and 47% for Mr. Wolf. A greater portion feel it will be a bad thing for the city if incumbent Don Atchison is elected when compared to Tom Wolf (28% vs. 15%, respectively). However, a far greater proportion is unable to offer an assessment of Tom Wolf in this area (38% vs. 18% for Mr. Atchison).... 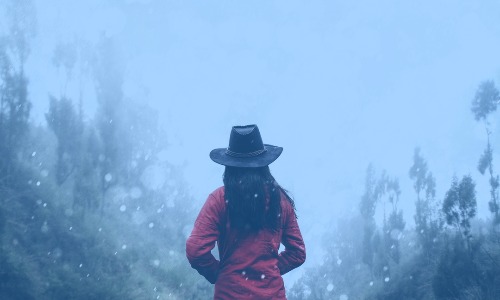 We recently completed a national study in partnership with the International Performance Assessment Centre for Geologic Storage of Carbon Dioxide (IPAC C02), detailed in today’s edition of the National Post. A few summary findings include: Although belief that climate change is occurring is common, Canadians are divided on what they believe the causes are and what the priorities should be in addressing a changing climate. A majority (54%) believe that climate change is occurring partially due to human activity and partially due to natural climate variation and one third (32%) believe that it is occurring due to human activity. One in ten (9%) believe that climate change is occurring due to natural climate variation. Just two percent (2%) of Canadians do not believe that climate change is occurring at all. No single priority for addressing climate change was chosen by a majority of respondents, indicating disagreement among Canadians. One quarter or more believe that promoting cleaner cars running on electricity or low-carbon fuels (35%), stimulating the development of industries that supply environmentally friendly technologies and services (29%), and raising the efficiency of industrial processes (27%) should be priorities to address climate change. Canadians are also divided on how effective they believe that Carbon Capture and Storage (CCS), a technology which involves capturing carbon dioxide and storing it underground, would be in addressing climate change. However, most agree that capturing and storing carbon dioxide should be compulsory when building a new coal (59%) or natural gas (57%) power plant. Despite this, there is considerable concern regarding the risks associated with the technology. At present, one quarter would be very worried (27%) and a further one third (34%) would be fairly worried if a CO2 storage site between 1.5 and 3km below the ground was located within 5km of their home. Survey responses were collected between May 29th and June 11th 2012. Additional survey completions were sought in Saskatchewan so that differences in opinion of residents of the province could be compared with those of residents of other parts of the country. A random, representative sample of Canadian residents is used for the Canadian results (total of 1,550 responses) but the full dataset including the extra survey completions in Saskatchewan is used for regional comparisons.  ...